Orthodontic headgear, while a bit of an eyesore, remains to be an extremely effective tool in the orthodontic world. It is used to correct severe bite problems such as underbites and overbites by altering the alignment of your jaw. Orthodontic headgear can also be used as a spacer to create room for adult teeth if there is not enough room left behind by the older teeth. Therefore, headgear is commonly used on adolescents and those headed into their late teens.

While individuals typically only have one issue that needs to be solved with the use of headgear, there are cases where two or more of these issues may be present at the same time.

Children 9-13 are the main candidates and patients that typically receive treatment from the headgear. At this stage in their growth, their teeth and jaw are still actively growing and are therefore easier to manipulate with orthodontic headgear. By doing this, the teeth and jaw problems are corrected in a  non-invasive manner, whereas putting off the treatment may have to involve surgery in the future as the bones are less malleable. For those between the ages of 13-18, further medical exams will have to be taken to determine whether or not the bones are still growing or if they have solidified. This is typically done through x-rays. If the x-rays show that there is no more growth happening, other measures will have to be considered as headgear will off little to no help.

True to its name, headgear consists of gear that is worn on the patients head. There are 2 different types depending on the issue that is being treated: a cervical and high-pull, or a reverse-pull facemask.

This one is typically used for those suffering from overjet and overbite. To do this, this type of headgear holds the maxilla in place while allowing the lower jaw to recover.

Cervical and high-pull headgear is made of three parts:

A reverse-pull facemask is used by pulling the lower jaw forward so it catches up with the upper jaw.

The reverse-pull facemask is made of three parts:

Whatever orthodontic headgear your orthodontist ends up recommending, both of them are a huge time commitment. Orthodontic headgear, in order to be effective, needs to be worn 12 to 14 hours a day. Because of this, orthodontists recommend putting it on just after dinner and wearing it through the night, then taking it off in the morning so it doesn’t disrupt your daytime activities.

Because orthodontic headgear is typically used on children, a schedule may be put in place so that the child can slowly get used to the device. Such a schedule may look like: 1 hour on the first day, 2 hours on the second, and so on and so forth.

As things begin to progress, your orthodontist will increase the tension in the orthodontic headgear. At first, this may cause some discomfort, so therefore taking a pain reliever to reduce the soreness is recommended. However, severe pain should be reported immediately.

As mentioned above, using orthodontic headgear consistently is key to having the treatment be a success. Depending on the age used at and the severity of the misalignment, treatment could be over in as little as 6 months. Speak with your dentist for any specific questions about headgear and whether or not it is right for your child. 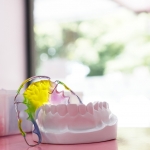