We’ve all been in this situation before. Your dental cleaning is going on as normal and then, out of the corner of your eye, you see your dental hygienist pick up The Tool. You know the one. It’s sharp and curvy with the potential of making your gums bleed and make your teeth feel like they’re going to fall out of your mouth when you come home half an hour later, and it’s all because your dental hygienist found tartar on your teeth. It doesn’t have to be this way though because today we’re going to talk about the differences between plaque, tartar, and how you can avoid buildup and save yourself from gum disease.

The first stage begins with plaque.  Certain foods cause more plaque buildup than others such as foods loaded with carbohydrates, as well as sweets and candies. You can’t see it because it is colourless, though sometimes it can also turn a very pale yellow, but it’s the sticky film that constantly grows on the surface of your teeth. Inside this film dwells bacteria which has the potential to cause tooth decay and irritate your gums, resulting in swelling and redness. Don’t worry too much, though. Plaque can easily be removed from your teeth by regular brushing, but it is when the plaque is not removed that it becomes an issue.

In the second stage, the film can harden to create tartar (also known as calculus) which unfortunately cannot be removed by a toothbrush and floss, and must instead be removed by a dental hygienist with that horrible tool that we mentioned earlier. Therefore, it is recommended to brush your teeth twice a day and keep up with regular flossing to ensure that the buildup doesn’t have a chance to take place.

The third stage can be a multitude of things, some more serious than others, but no more desirable to have. If tartar and plaque are not removed, they can lead to issues including:

Both cavities and gingivitis will be covered in detail in the weeks to come, but in the meantime, please keep up with your good brushing habits to keep your teeth and gums in optimal health. If you need a refresher course on proper brushing and flossing techniques, check out this blog.

The Ins and Outs of Wisdom Teeth 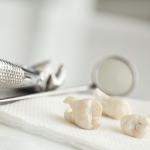 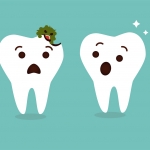 Cavities: Not Just for Children
Scroll to top