The most common and well-known type of gum disease is gingivitis, a condition that includes inflammation in the gums and around the crown of the gums that results from the development and accumulation of plaque in the gum line. Symptoms include red and swollen gums as well as bleeding. Is the gums, which may be seen on your toothbrush during a dental test.

Bad breath is often noticeable, and gingivitis is also caused by certain health conditions and changes in medication alone. Hormonal changes such as puberty and pregnancy aggravate the disease if there are bacteria in the dental plaque. Dentists call this type of disease pubertal gingivitis or gestational gestation.

Pregnant women have a higher risk of developing periodontal disease during pregnancy, so they should be aware of the need for intermittent cleaning during this period.

Gingivitis : This painful gum condition is a condition in which dental plaque builds up in the gum line, causing the gums to become irritated and sensitive, sometimes causing bleeding.

Viral infection: Often the cause of swelling is a serious infection that must be removed, in the case of swollen gums is one of the causes of infection that causes dental plaque. Dental plaque increases fluid and white blood cells in that area, causing gingivitis.

Allergy to toothpaste or mouthwash

Peppermint oil: To remove the swelling of the gums naturally, it is enough to combine 10 drops of peppermint oil with warm water and rinse your mouth with the obtained solution daily.

Peppermint tea: Peppermint tea also improves pain and inflammation of the gums, just pour some fresh or dried mint leaves into a glass of boiling water. Then sip it after a few minutes.

Green tea: Boil some green tea and after cooling, wash the gums with it and then brush carefully.

Brine: Pour some salt into a glass of warm water and rinse your mouth several times a day with this solution to reduce swelling, inflammation and even bleeding gums.

Clove oil: To reduce swelling of the gums, just apply some clove oil to the gums. The composition of this oil greatly reduces the inflammation, swelling and pain caused by gingival infections. Of course, it may be accompanied by a slight burning sensation.

Aloe Vera: Aloe vera has a wonderful effect in treating gingivitis. Massage swollen gums with aloe vera pulp and rinse your mouth after a few minutes.

Fresh lemon juice: Using a combination of warm water and fresh lemon juice reduces gingivitis and even eliminates the cause of bad breath, just gargle with this solution twice a day.

Baking soda: Add some baking soda to a glass of warm water and rinse your mouth with this solution after brushing.

Roses and sour lemon juice: To quickly get rid of gingivitis, just mix a little fresh lemon juice with rose extract and gargle with it and keep it in your mouth for a few minutes and then throw it away. Repeat this three times a day for full effect.

Prevent gingivitis: A soft, quality toothbrush, especially its rechargeable model, should be used twice a day to reduce the risk of developing the disease. Flossing, like other things that can be done for oral hygiene, such as mouthwashes and interdental cleaning devices, reduces the chances of gingivitis.

People who have experienced the disease may want to improve their gingival defenses by using stronger toothpaste.

The best way to prevent gingivitis is to see a dentist or oral hygienist for regular grooming twice a year. 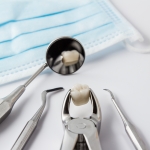